Canvassing and Phonebanking at the same time, or want to archive a past canvass round but still retain its insights?

Written by Janet Breen
Updated over a week ago

Ecanvasser developed "Canvassing Efforts" to address both these scenarios:

We refer to each round of engagement as a "Canvassing Effort".

Note: It's important to understand what an Effort consists of. Your database itself exists in the same state (ie same voters living in the same houses) across all of your efforts, and data points such as Contact Details and Custom Fields hold the same values across all Efforts.

A Canvassing Effort specifically holds the data point relating to the canvass, of:

Regarding Surveys, the overall results of a survey will be calculated separately for each Effort - as represented on the Results page. However, each individual person within your database will only have on active set (the most recently completed) of survey results on which they can be filtered.

With this in mind, it is worth noting that this makes your Lists re-usable between Efforts. This is particularly relevant if you create your Lists on the basis of Precincts, or via Cutting Turf.

Under Canvassing Efforts you will have the option to:

Once you've selected to do so, you simply need to title the Effort, and select Save. This Effort will immediately become active in the areas of the dashboard and apps discussed later in this document.

When you hover over the effort, it will give you the archive and edit options like below:

Editing an Effort will simply allow you to change the name of this record. This is useful if you'd like to update the naming conventions you've used previously.

You might do a few rounds of canvassing one after another, or you might have a few engagements ongoing at the same time; however, once you finish with that round of engagement, you might want to lock those records so that nobody can accidentally change them. You can do that by archiving the effort, and users will not be able to change any Canvass information on this Effort any longer (though you can still review it's data throughout the dashboard).

Once you have more than one Effort, you will notice the option to filter between them in multiple places across Ecanvasser e.g filters on the dashboard and selecting efforts in the settings page in the app's.

Filtering
This will continue to work in the manner you're used to within Ecanvasser; however, now rather than having only one Canvass section with which to Filter, you will have an individual section for each Canvass Effort:

Using this, for example, we could cross reference the contacts who we neither Canvassed via door to door, or via our Phone banking - perhaps we could send letters to these Houses?

Active Effort
In some areas, where there is a display as to what the Canvass Status of a House is; or a count of the number of Houses (Map page, and Streets & Lists tabs of the Voter Database), you will have the option to select an Active Effort:

You may wish to note, that if Canvassing from the Database or Map page; you will have the opportunity to select which Effort you are canvassing as a part of. However, the default select Effort will be the one most recently select as an Active Effort.

Results Page
Similarly to the Active Effort filters referenced above - on the Results page, you will now be able to select whether you wish particular charts to be based upon a particular Effort.

Android and iOS Apps
If a campaign has more than one Effort, then Canvassers will be able to navigate between Efforts on their app via their Settings page. 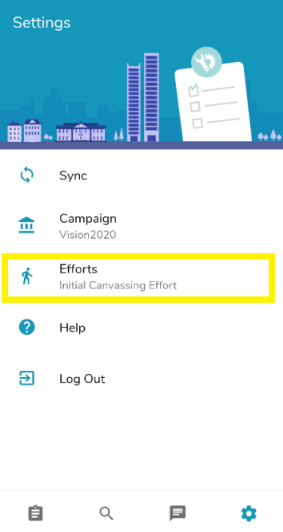 If you have any additional questions contacts support@ecanvasser.com or use the in-app messaging feature.