What syncs, and when does it occur?

Written by Alan Conway
Updated over a week ago

For most users, data syncs across as they would expect rather intuitively. However, there are some finer points that more advanced users might be interested in knowing, so below we've put together a comprehensive list of exactly where data syncs too and from.

Data will sync whenever Ecanvasser or NationBuilder pull a trigger.

Import List
When you select to Import a List in Ecanvasser, all the Voters on that List will be synced across, alongside all relevant data points

Update List
All voters who are currently on that List will be synced across, or updated if they are already in Ecanvasser

Edit a Voter in NationBuilder - ?

Canvass Voter
Every time you Canvass a Voter in Ecanvasser, the Canvass information, as well as any relevant data point updates will sync across

Edit Voter
Each time you edit a Voter, assuming the Edited information is syncable, it will be sent across to your Nation

If you delete a voter from Ecanvasser, they will note be deleted from your Nation; and likewise, a Voter deleted in NationBuilder will not be removed from your Ecanvasser campaign.

To be synced across to Ecanvasser, Voters must have both a First & Last Name, as well as a complete address. These data points sync as follows: 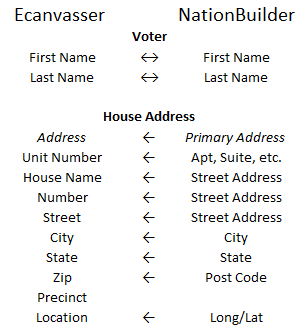 It is worth noting that for optimal data structure in Ecanvasser, addresses in your Nation should be structured so as that they take advantage of NationBuilders Apt/Suite field. If this information is held with general address information, it may result in Ecanvasser believing this is part of the Street Name.

Canvasses & Contacts
Whenever you Canvass a Voter in Ecanvasser, the record of that Canvass will be synced across to your Nation as a Contact via Door Knock. The terminology translates as follows:

Note: These fields are managed in the inverse, i.e. a 5 Star Reception Rating will sync to your Nation as a Level 1 Supporter.

A number of individual fields will also sync both ways between Ecanvasser & NationBuilder, while some do not. The chart below will indicate the flow of those that do: 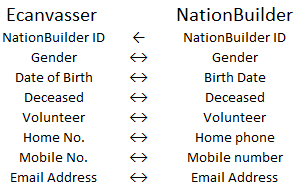 Other Data Points
Currently, any other data points will not sync between Ecanvasser and NationBuilder. This is usually due to some technical complications regarding integrating both platforms, that said, we're always looking to deepen our integration with NationBuilder, and expect to do so regularly!

In the meantime, if there is a particular piece of information your require syncing between two, the usual solution is simply to opt to use Custom Fields to host the information on both sides, as outlined above.